Some of my favorite headphones, regardless of form factor, are my top custom-fit in-ear monitors (IEMs). So, as a custom-IEM-wearing Head-Fi’er, perhaps I’m biased, but what I’m going to tell you about in this post was easily my favorite thing at CES this year: The eFit digital ear impressions system. Why? Because I think this amazing system is going to be one very critical step in getting custom-fit in-ear monitors–and custom-fit hearables/wearables–into a store near you.

If you watch our Head-Fi TV videos, you may have seen our recent episode about Ultimate Ears’ new “digital journey” process, which involves 3D-scanning/digitizing of silicone ear impressions, digital sculpting of the scanned ear impressions, and then SLA 3D-printing of the custom IEM shells from those. (To understand the advantages that come with UE’s digitization of most of the custom IEM process, you can watch that episode of Head-Fi TV by clicking here.) With the intent being to digitize as much of the process as possible, there was one major step in the process that was anything but digital–the squirting and squeezing of decidedly non-digital goo into the customers’ ears to get silicone ear impressions for scanning. When it came to getting fitted for custom-fit IEMs, silicone was the only choice for detailed full-ear impressions. “Was” is the operative word now. 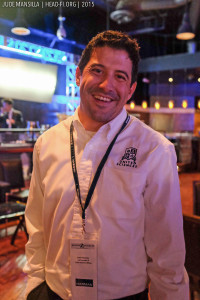 A couple of months ago, an inventor named Karol Hatzilias from a company called United Sciences contacted me through LinkedIn, after watching the Head-Fi TV episode referenced above. Karol–pronouced “Karl”–is a co-founder, and the Chief Science Officer, of United Sciences. Karol’s text message was a short one, saying little more than “You might be interested in the in-ear 3D scanner I’ve been working on… We are using the scanner to make custom in-ear monitors and I was hoping to get your input on the process and products.”

He was certainly not the first to contact me with this kind of claim. Over the years, other intrepid entrepreneurs have attempted to capture full-ear (ear canal and outer ear) impressions without silicone, but none of them (to the best of my knowledge) have succeeded. Until now. You see, Karol and his team have done it with their eFit system, and it’samazing.

When you see United Sciences’ eFit system being used, it all looks quite simple (and, to the operator and the customer, it is simple). The customer puts a lightweight apparatus on his head that looks rather like a circumaural (around-the-ear) headphone frame adorned with a lot of dots (we’ll get to those dots in a minute). After that, the operator scans the ears, the result (a few minutes later) being a set of fully digital full-ear impressions. Though it seems so simple in operation, how it all works is really quite remarkable–quite a mix of patented technologies and techniques that they’ve sewn into a very elegant, easy-to-use solution.

Let’s start with that headphone-looking device. Those dots on it are called tracking fiducials. Among many other things, the handheld scanner contains three 14-megapixel cameras, running at around 20 frames per second. As Karol describes it, “The two outside cameras look at the dots on the headset the customer is wearing. The position of the three-camera system is calculated, relative to the headset the customer is wearing. The third, middle camera is used to reconstruct each slice, either ring or line. As the three-camera system is moved, we reconstruct the whole ear, by assembling the slices.” 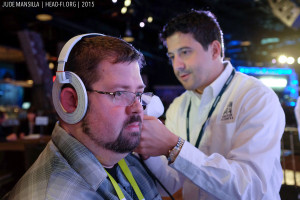 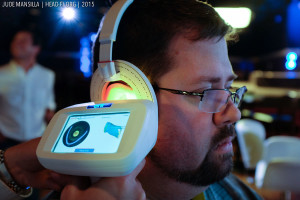 According to United Sciences’ CEO Samuel Kellett, to scan the ear canal, Hatzilias invented the only 3D scanner in the world that can scan or measure a hole. (Not surprisingly, they’re already using this radial scanning technology in other applications and industries, including aviation.) Once out of the ear canal, the eFit system switches from the radial laser scanner to a line laser scanner to scan the outer ear, completing the full-ear impression. Again, the tracking fiducials are critically important here, the cameras using them to track the scanner’s precise position every step of the way, from the in-ear radial scanning, to the outer-ear line scanning. With this system, if the scanner’s hand or the customer’s head moves, the geometry doesn’t change, and, thus, the scan’s accuracy is not affected. Watching it work is amazing. I was wide-eyed the entire time, as my scan quickly took shape, thinking this technology looked like the real deal. It all happens rather quickly, too, taking only a few minutes per ear.

The software that puts all the data together is also immensely impressive, processing a large amount of data per scan that it uses to intelligently assemble the final 3D full-ear impression. Even though the scanner’s resolution is fine enough to easily capture tiny details (like hair in the ears, for example), the software intelligently determines what to keep and what to ignore in constructing the ear scan. While the raw data that the eFit software processes from each scan is around 30GB, the software’s output–your final full-ear scan file–is only about 1.5MB in size (and so easy to store and send).

But is the eFit system the real deal? That’s what I wanted to find out, and only the final product–the custom IEMs made from the scans–would convince me. To start, United Sciences, at CES, 3D-printed me a small custom-fit in-ear–not a full-ear IEM, but something that looked more like one of those smaller bean-shaped earpieces that disappears almost fully into the ear. It was a simple, single-driver balanced armature design, and, in terms of sound quality, it sounds decent for something they scanned and printed in well under an hour. Most importantly, the fit of both ears was great. Here’s what they printed for me on-the-spot at CES: 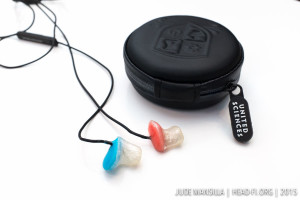 (Above) The United Sciences eFit-scanned custom in-ears printed for me at CES.

Still, I wanted to find out if one of the top custom IEM makers could use my eFit digital ear scan files to make a full-ear custom IEM for me. Since Ultimate Ears has been working with United Sciences since around the time Karol first contacted me, I asked Ultimate Ears’ Mike Dias if they could make me a third pair of Ultimate Ears In-Ear Reference Monitors. My first pair of UERMs was made using the most traditional methods–silicone impressions, and acrylic shells that were poured into a negative colloid. My second pair of UERMs was made to see how well SLA 3D-printed shells would fit compared to the first pair–but these were still made by starting with silicone ear impressions. This third pair was to see how a fully digital workflow would do, compared to the other two methods. I emailed Mike Dias my eFit impressions. Two days later, my latest set of UERMs arrived. Here are the three pairs: 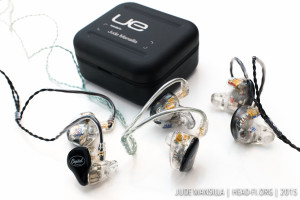 All fit well. All seal well. All sound the same, because they are, for all intents and purposes, the same. This is remarkable stuff.

What’s the big deal you ask? To start, the eFit process is easier to learn than the traditional silicone process. Also, the eFit system seems to be safer than silicone impressions. Though it has only happened to me once in many silicone impression sessions, one never forgets when the silicone goes too far–the pain can be excruciating (and my ear was sore for more than a day after my eardrum met the silicone). With the eFit system, there are some key safety measures in place. First, the inside camera also serves as a video otoscope, so the operator can see if she’s approaching something (like your eardrum). There’s also a depth gauge, marked for safety. Finally, the shape of the scanner’s body is specifically designed to keep it from going too deep.

With its ease of use–and the inherent safety of the system–virtually any employee can be trained to properly use the eFit system in about an hour. For silicone impressions, I’ll only go to those with extensive experience–like qualified audiologists–to have my ears shot full with silicone. With the eFit system, I’d be perfectly comfortable with a part-time hourly retail employee scanning my ears.

In Tokyo, a store called e-Earphones (which, by the way, you can see in this old Head-Fi TV video here) now has an entire floor dedicated to selling custom in-ear monitors. Now imagine being able to go into a store like that, have your digital impressions scanned in minutes (or have them simply load up your scan files if you’ve already been scanned), and have your IEMs 3D-printed while you wait. It’s going to happen–I don’t know exactly when, but it’s going to happen. I think e-Earphone’s owner Hironobu “Boo” Ooi knows it, too. Here’s Boo getting his ears shot with the eFit system the other day at NAMM: 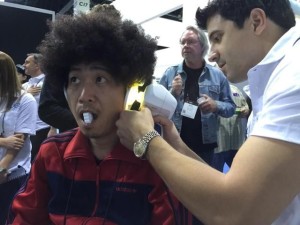 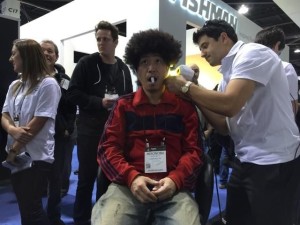 (Above) Hironobu “Boo” Ooi, founder and owner of Tokyo’s e-Earphones store, getting eFit-scanned by Karol Hatzilias at NAMM 2015. (Photographs by Mike Dias.)

As fast as things are moving, I think the benefits and comfort of custom-fit earphones and hearables/wearables will become widely available at retail. I think busy travelers will one day get scanned in their departure airport, and have their custom IEMs waiting for them at their arrival airport. I think we’ll be able to go to a store down the road, and order custom earphones–from affordable models to high-end monitors–while we wait.

At CES, that’s exactly what United Sciences was doing at the Harman exhibit. They were scanning ears, and then 3D-printing custom-fit JBL Bluetooth in-ears for people at the show while they waited. They were also printing those little bean-type customs I showed you earlier. This collaboration with Harman was an early proof of concept, to show that it can be done, and it looked like a fantastic success to me.

At NAMM 2015, as I type this, Karol and the crew at Ultimate Ears have four eFit systems cranking away, and they’re on pace to do between 1000 and 1500 scans during the show! Here’s Apple co-founder Steve Wozniak (one of my heroes, by the way) getting his ears scanned for a new set of UE customs: 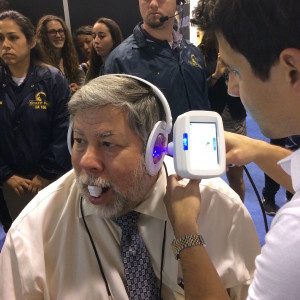 (Above) Steve Wozniak (Apple co-founder) getting eFit-scanned for a new set of Ultimate Ears IEMs at NAMM 2015. (Photograph by Mike Dias.)

Soon after that first message from Karol a couple of months ago, he and Sam (Kellett) paid a visit to Ultimate Ears’ headquarters in Irvine (California), to demonstrate the eFit system. I received a call from Mike (Dias) soon after Karol and Sam left, and Mike was, to say the least, excited.

“This was the missing piece of the ‘digital journey,'” he responded. “It’s very much the real deal.”

I hope you can now understand why I was so excited about it at CES, and why, when I’ve been asked what my favorite thing at the show was this year, United Sciences’ eFit system has been my answer. It was, without a doubt, the brightest, most significant highlight of my CES week.