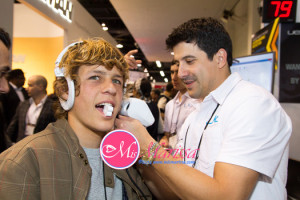 As many musicians and artists know, getting custom in-ear monitors and hearing protection use to take weeks to get and was a very laborious process to produce. With the new 3D scanning technology by United Sciences / Ultimate Ears it has remarkably cut down the wait time between scan, mold – actually printing – and the device in your ear.

Ultimate Ears new 3D optical ear scanning technology will make molded earpieces a thing of the past. The new scanning process uses a patented In-Ear scanner that takes a precise 3D image and measurement of the client’s inner ear and outer cavity. This accurate scan sends the measurements to a 3D printer, producing a precise and tailored earpiece that ensures optimal fit, comfort and seal resulting in superior fidelity sound.

The scanning process was completely painless and took under 5 minutes to complete. The booth was flooded with musicians waiting to get their scans, so it took longer to get in the chair then to set up and do the full scan. Everyone at the Ultimate Ears booth was very helpful, the scan tech was super nice, and he answered every crazy question thrown at him.

Examiner had the chance to catch up for San Diego’s new 2015 breakout artist Cody Lovaas after he sat down to get his new 3D scan complete at the Ultimate Ears Booth at The NAMM show 2015. Cody spoke with Examiner about what’s to come in 2015. The homeschooled teenager had recently finished up the necessary work to graduate from high school more than a year early. He is planning a spring/summer tour up the west coast, then hopefully more national dates. Stay tuned to AXS.com for tour dates as they are available.